His Dog Up And Died 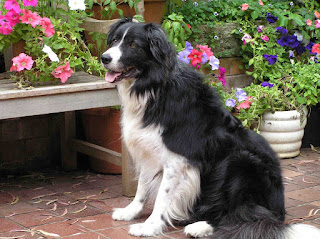 "He spoke through tears of fifteen years how his dog and him…Traveled about. His dog up and died, yes he up and died, after twenty years he still grieved."

The quote above is from a popular song recorded by many artists. Can you remember the name of the song? Well done if you remembered 'Mr Bojangels'!

I’ve always liked the song, but last Friday it came back to me with a jolt when our dog of nearly twelve years quite unexpectedly and most suddenly 'up and died'. I came home early from work on that day and mowed the lawn – something that Mickey always loved me doing, as it put me out in the yard and left him with a nicely mown lawn. He ate his dinner as if everything was normal. We went out to dinner and when we returned home we found him near the back door, slumped forward after breathing his last. Twelve year old dogs are living on borrowed time, but it was still the most awful shock.

A death is the most horrible thing. We forget how wonderful living things are – growing, moving, developing, interacting, responding and relating. Faced with death we are reminded of its starkness, its bleakness, its coldness, its emptiness and its finality.

It is not surprising that the Bible describes death as the enemy. All that we have, all that we hope for, all that we desire, and all that we value, is snatched away in an instant by death. Death spares no one and cannot be evaded, even by the most powerful and wealthy. Death, in theory, respects the young and only troubles the old. But in practice death threatens every life every day, sometimes waiting but occasionally pouncing with unexpected power.

The hope that Christians celebrate every time they gather is based on the belief in resurrection - that death cannot be avoided but it can be defeated. When Jesus died His friends were defeated and His movement seemingly destroyed. But His followers were renewed and His movement was restored as His death was followed by life. A Christian funeral service is filled with the most unlikely language, that as Christ died and was raised, so all who trust in Him will also die and yet be raised. Thus resurrection is not a reward for faithful service but a gift graciously received. We are called to follow Christ from life to death and then from death to everlasting life.

Without hope we respond to death with unmitigating despair. With hope in Christ death is still the most terrible loss, but tinged by an extraordinary confidence that death has indeed lost its sting.