The Saints Will Have Their Day 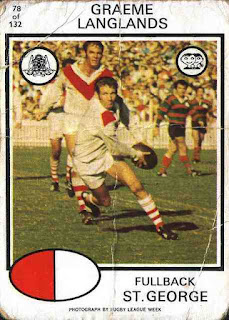 Back in 1975 I was a fairly committed Eastern Suburbs Roosters Rugby League fan. Actually my first love was Eastwood Rugby, but when my childhood hero defected to Rugby League to join Easts, my support defected as well. I had a good mate at high school at that time who was a St George Dragons supporter. With the kindness of free tickets won from the radio station 2SM, young Ab and I went to the 1975 Grand Final between Easts and St George. It was a great day for me but a bad one for my mate. The great Dragons full back, Graeme (Changa) Langlands, played his last game as captain coach, relying on pain killing injections and experimenting with white boots. Both were a failure as Changa had a shocker; he did not play well. Easts won 38 to nil and Langlands retired soon after the game. It was a happy day for a Roosters supporter and if I remember correctly, I may have gloated just a little to my mate who supported the Dragons.

Thirty-five years have passed and last weekend the Dragons had their revenge. Their victory in the 2010 NRL Grand Final was 32-8. I really ought to ring up young Ab and congratulate him. If you wait long enough many things turn around. Often the greatest victories and the most arrogant of victors turn out to be only temporary.

Morally in Australia at the moment we seem to be advancing quickly in a particular direction. This year in NSW same sex relationships have begun to be registered with the Department of Births, Death and Marriages and same sex couples can now legally adopt. In November the NSW Parliament will debate the legalization of euthanasia and surrogacy. In the Federal Parliament it seems inevitable that same sex marriage will be debated and possibly approved. This follows the legalization of casinos, the decriminalization of prostitution, the simplifying of divorce and a host of laws that essentially allow for a more libertarian moral code. It appears inevitable that our society seems to have decoupled itself from its Judeo-Christian moral heritage and is on a constant slide towards a more liberal atheistic worldview.

These changes may be inevitable but they may not be permanent. Some of us may not live to see the change, but the basic problem with moving away from a Christian worldview is that it will not necessarily produce a better society. Over the past 2000 years especially, public morality has been consistently cyclical. Moral liberalism has been tried in the past and found extremely wanting. Societies ignored God and his moral laws and then found that like the so called 'laws of nature', opposing them only caused unexpected pain and complications. Societies like the Ancient Roman and Greek civilizations allowed all sorts of moral indulgence, which inevitably led to a breakdown in these civilizations.

I think it is worthwhile for Christians to try and hold back what seems to be a falling moral tide. My fear is that there are many battles left to lose - but one day the tide will turn!