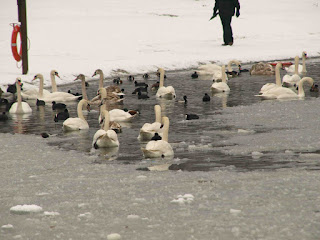 In the midst of a very busy weekend, I vegged out for a few minutes to watch a bit of sport in the form of the soon to be disappearing game we know as One Day Cricket. Cricket has been on a journey towards baseball for the last few decades and now that journey seems almost complete in the latest form of the game: 20-20. Watching One Day Cricket in February seemed a bit weird anyway, but then an advertisement really confused me.

The commentator announced the sport that was going to be coming up next weekend, which included the Winter Olympics, cricket and rugby league - all on the one day! I might have missed something, but it sounded like the rugby league game was the ‘Indigenous All Stars' versus the All Stars, which to a cynic sounded like the ‘black’ All Stars versus the ‘white’ All Stars! How weird is that! Maybe the Jamaican bobsled team can make a guest appearance at a 20-20 match at half time to hype up the crowd a bit more. Or the rugby league might consider adopting a bit more aggression with a few tips from ice hockey.

Though a long time lover of sport, I am becoming increasingly disillusioned when the sports that I love are driven not by the good of the sport, the fans or even the players, but by the pursuit of money. Cricket, like other professional sports in the past, is in very real danger of not only killing the goose that lays the golden egg, but trivializing the goose such that it morphs into a sterile duck.

Money is important and should be well managed, but somehow should not be allowed to drive, determine and set our agenda. Keeping money in perspective is always a battle. However a society that has convinced itself that God does not exist, seems accidentally intent on finding a replacement god and somehow money has a habit of thrusting itself forward to fill the vacancy. Commercialising the sales of food, clothing and housing often has a few unintended side effects but seems to work okay. Commercialising the arts, sports, medicine, education and even science often leads us into second best and at other times can lead us down paths of downright destruction. When a person sells his or her body for cash, the minority who buy and exploit revel, but the majority just weeps. When our community collectively sells our soul there are also those who make their fortunes, but overwhelmingly we are much the poorer.

What good will it be for a man if he gains the whole world, yet forfeits his soul? Matthew 16: 26