When the mob leads you astray 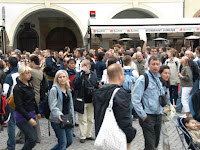 Sheep have a habit of moving in a mob. They do not always travel in the wisest, surest or safest of paths, but sheep feel comfortable with the mob. When the mob moves, sheep follow. We excuse this, for after all, sheep are not very bright.

In recent years I have often heard the mob telling me things like the fact that the Himalayan glaciers would melt by 2035 unless I installed low energy light bulbs. Well off course I have installed the light bulbs, but now I read that the mob (led by those IPCC experts) have decided the glaciers may be around for another 100 years and that the first report was based, not on a scientific report but on a newspaper article.

Fortunately the economic mob keep telling us that from their front the economic mess of the last few years is all fixed and if we follow their advice, which I think is to keep spending, then we will all be in green pastures for ever. Unfortunately again there seems to be a few worrying things around that the mob seems to ignore. Things like 10% unemployment in the USA, 25% of mortgage holders in the US being in negative equity, and the USA having a national debt of 12.2 trillion dollars, increasing at a rate of 3.83 billion a day. This seems to worry a few sheep but the mob is on the march again and the pressure to follow is hard to resist. In some countries like Greece, they are facing the awful prospect that the whole mob may default. In Australia our economic and politician mobs are sure that we have avoided the crisis altogether by building a new library or school hall in every school, by taking our government grants and buying a new TV, and by a whole bunch of young people buying their first home. The fact that Australian personal household debt is now higher per capita than the USA, has increased over 70% in five years and now stands at over 100% of our national GDP, is no problem to our mob because we are all climbing up the mountain together.

Finally the mob is told in all sorts of subtle and direct ways that everything is okay (apart from climate change), we have nothing to fear and that the old fashioned God stuff is irrelevant, unnecessary and just something designed to placate the mob. Well this sheep is not convinced! Maybe the mob is still in need of a good shepherd who will choose the narrow way, who will warn us of the wolves, who will call us by name and who alone will lead us into eternal green pastures.

“I am the gate; whoever enters through me will be saved. He will come in and go out, and find pasture. The thief comes only to steal and kill and destroy; I have come that they may have life, and have it to the full. I am the good shepherd. The good shepherd lays down his life for the sheep.” John 10: 8-11