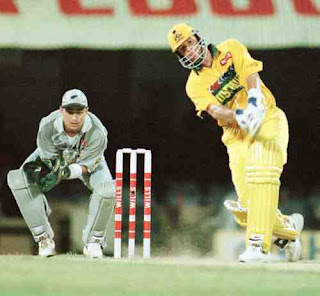 Back in the 80s there were twin brothers from NSW who came to prominence in elite cricket circles – their names were Steve and Mark Waugh. Both were incredibly talented all-rounders. Steve made it to the Test Team in the mid 80s, but the stylish and elegant batsman, Mark, did not really become a permanent fixture in our Test Team until the early 90s. For many seasons Mark had a rather unusual nickname - he was called Afghanistan. At the time Afghanistan was occupied by the Soviet Union and a long, pointless, deadly, and in many ways, forgotten war was being fought. Mark Waugh was nicknamed Afghanistan because, for many, he too was the forgotten Waugh.

Fast forward twenty or so years and the forgotten war has one significant difference – now the USA, with the help of its allies (including Australia), is the occupier in Afghanistan. For the families, friends and fellow soldiers of Jacob Daniel Moerland, 21, and Darren James Smith, 25, the war is far from forgotten. In the last week these two young Australians died trying to defuse bombs from a war that has now gone on for nearly nine years, with no end in sight. Over 1000 Americans have died and one could only hazard a guess at the death rate amongst the locals.

Does anyone remember why this war started and what will determine a successful outcome? It started because of September 11. If we are honest it was in part an attack inspired by the horror of those planes flying into the twin towers. It was an attempt to capture Osama Bin Laden and neutralise the forces and environment that fuelled terrorism. Osama was never captured and the bases of terrorism have moved, hidden and multiplied. From a nationalist point of view, war is right because we say 'right' is on our side. From a Christian point of view, war is almost always wrong, because as someone once said, it tends to break all Ten Commandments simultaneously. Scholars, philosophers and theologians have reluctantly agreed that maybe some wars are 'just wars', when aggressors cannot be halted without force. But the day we get comfortable with war is the day we ourselves pay a terrible price.

When our media is dominated with a new tax on mining, a soccer tournament and the increasingly risky behaviour of teenage sailors, we ought to pause a little longer and grieve with the families of Jacob Moerland and Darren Smith. As we grieve we have to ask again, "What are our soldiers doing there at all?" For the followers of the Man called the Prince of Peace, the One who called us to love our enemies, to turn the other cheek and to forgive, a seemingly unwinnable nine years of occupation makes little sense.

In recent days the new UK Government has indicated that they can’t really economically afford to be in Afghanistan. There are many more compelling reasons for an exit strategy from a war whose justification is cloudy and whose outcome seems not in sight.

““You have heard that it was said, ‘Eye for eye, and tooth for tooth.’ But I tell you, do not resist an evil person. If someone strikes you on the right cheek, turn to him the other also. And if someone wants to sue you and take your tunic, let him have your cloak as well. If someone forces you to go one mile, go with him two miles.” Matthew 5: 38-41