The Fight For Good 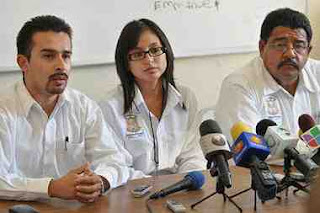 Marisol Valles Garcia is just 20 years old, the mother of a baby son and still a student studying criminology. But she is also the newest Chief of Police in a drug-plagued region of northern Mexico. There are two reasons why Ms. Valles Garcia is now the new Police Chief of Praxedis Mexico: the first reason is that she wanted the job and the second reason was that no one else wanted it. After the death of the previous Mayor and numerous police officers, it sounds like the script of a bad old wild west movie. The only difference is that this is not a movie and the story highlights the terrifying reality of a society where evil wins and everyone loses.

We forget so easily that the peace, the stability, the order, the rule of law, the freedom and the prosperity we enjoy in a place like Australia, is at best fragile and always under threat. In popular culture we glamorize the taking of drugs, we entertain ourselves with TV shows about underworld crime, and we drool over the lives of the rich and famous, even those whose colourful antics are clearly on the wrong side of the law. We take for granted that our police will always be there to protect us, anticipating like some cheap Hollywood cop show that the bad guy will always get caught and the good guys will always win.

What we fail to see is that society's battle with evil is the same battle that goes on in every soul. We expect good to prevail over evil in society but often convince ourselves that we can personally dance with the devil, even for a little while. We watch a society that had no intention of ever surrendering to evil, somehow unable to fight back when the dark forces have literally become insurmountable. Tragically the same battle can be lost personally when conviction makes way for compromise, compromise leads to carelessness, carelessness surrenders to criminality, and before long we are consumed.

The famous writer, CS Lewis, once said that his conversion to Christianity came with an unexpected gift. He learned through faith that good was indeed good. He was not made perfect. He still battled the things we all battle. But faith in God as Creator and the knowledge that he was a sinner who needed a Saviour, somehow revealed to Lewis that the battle between good and evil needed to be led with a conviction that good is good and evil’s consequences are hell.

Marisol Valles Garcia deserves our prayers, for she will surely need them.

The fight for good needs many more brave volunteers.

Proverbs 11: 23 The desire of the righteous ends only in good, but the hope of the wicked only in wrath