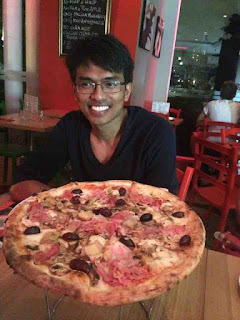 On Monday Nov 2, 2020 a young Asian fisherman did not return to his Sydney home after an early morning fishing trip. Some days later his body was found and identified as Wuttichai Khamjareon, aged 32. We and many of his large group of friends knew him as Woody.

In 2004 Woody’s village, on the west coast of Thailand, was all but destroyed by what is often referred to as the Boxing Day Tsunami. In 2005 a team of students and staff from Macquarie University travelled to his village to assist with the clean-up. Our son Tim was a student and member of that team, and it was there that he first met Woody. Woody’s engaging personality, intelligence and vibrant spirit so impressed the team that the university decided to offer Woody a scholarship to learn English and to study Geography on campus in Sydney, Australia.

Woody arrived in Australia the following winter speaking almost no English. The culture shock of moving from a small, rural fishing village in the tropics to a huge Australian city was extreme. Woody moved into our home and became part of our family for several years. In Thailand Woody had been brought up by his grandmother. She was very ill at the time that he left home. Upon arrival in Australia Woody was greeted with the very sad news that his grandmother had died during the time he was in transit. It was a tough start to his new life.

The challenges Woody faced in Australian were enormous. There are few languages more different than Thai and English, and Woody had to learn not only to converse, but to be ready to start a university degree. I remember Woody asking us one day if we could take him to the market. When we arrived at Woolworths he was shocked. A market for Woody was a vibrant place of colour, smell, life, fresh food, and excitement. Aisles of processed packaged food was not what he had in mind. The Sydney winter was freezing. He was confused when people failed to treat him well or even fairly.

Despite the challenges and difficulties that Woody faced, there was always one constant. His smile. Woody smiled all the time. He smiled with his whole face and you couldn’t help but smile back. He was always willing to help. He taught us the correct way to serve a mango. One day he saw me up a ladder cleaning out the gutters and before I knew it, he was on the roof bare footed and sweeping the tiles. He joined us for Christmas celebrations with our extended families –everyone loved him. He attended all three of our children’s weddings. That smile somehow made those family celebrations complete.

Woody never did finish his degree, but instead found a greater love. He loved to cook. He trained as a chef. The staff and customers of one of Sydney’s leading French restaurants are no doubt also weeping at the loss of their beloved Woody.

In recent years we have seen less of Woody, but we knew he was doing well.  He fell in love and married. We watched on Facebook as that shy, lost teenager grew into an extraordinary young man. Fishing probably became more important for Woody for two reasons. Firstly, fishing was probably a link back to his village in Thailand where he stood on the edge of the ocean and fished as a child. And secondly Woody’s diet as a child was mostly fish and so he fished to cook, to eat and to live.

Woody was a person that embraced life. When the tsunami struck his village killing thousands Woody chose to embrace a new adventure rather than be destroyed by grief. He joined our family, was a part of Macquarie University, and then found a new career, marriage and a whole new group of friends. We don’t know exactly how he died, but he died accidentally doing something that he loved – fishing.

Grief is an emotion we cannot avoid. We live in the shadow of death. We love in the shadow of grief. Woody had every reason to despair given the tragedy and struggles he had faced and he could have easily given up on life. But he chose to do the exact opposite. His positive spirit, his generous smile, his warm laughter, his passion to achieve through hard work and his engaging personality spread blessings to many across the world from Thailand to Australia.