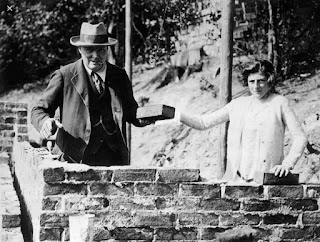 The enemy is at the door. Still unseen, peril is imminent. Glimpses of encouragement are overwhelmed by a global threat that is no

t going away. Many have given up. Hope is in short supply. Politicians are fighting amongst themselves without vision, consensus or even a plan. It’s May 1940, Germany’s rise appears to be unstoppable and Winston Churchill has just become the Prime Minster of the United Kingdom.

The wheel turned. Churchill’s resolve, his rhetoric, his doggedness and his single-minded determination saw the UK firstly resist invasion and eventually prevail to victory. Most would expect that while Churchill served as PM he devoted every single moment of his life to his task of leadership. That, however, was not t

he case. Churchill was a complex and unusual character fuelled in many ways by eccentricity and a passion for life.

Even as PM, Churchill still found time to relax and engage in an eclectic mixture of hobbies. Churchill was an avid reader. His reading of history, warfare, literature, politics and biography fuelled intellectual growth and an education wider and deeper than any university qualification. He took up painting at the age of 40 and found in the creative arts an outlet that helped him deal with stress and sparked a renewed love of colour and life. He wrote and set himself a goal to write 2000 words a day – so th

at when he needed to write his skills were honed and sharp. He also laid bricks. Yes, Churchill was somewhat of a do-it-yourself bricklayer, building garden walls and even small buildings. Added to his 2000 words-a-day writing goal was a 200 bricks-a-day, wall building goal. Hardly a picture of physical health, Churchill’s bricklaying was a physical challenge and a distraction from the pressures of leadership and war. His bricklaying led him to landscaping and to the planting of gardens and orchards. Finally, Churchill was an animal lover. In his early life he was an accomplished horseman and polo player. With less time as PM he enjoyed a menagerie of dogs, cats, birds and fish.

During a time of difficulty, it might be tempting to dwell only on the problem at hand. Balance may suggest an alternative. The humble hobby remains much more than a refuge from the storm outside. Life affirming interests and pursuits broadens horizons, challenges perspectives, releases minds, develops skills and renews passions.

Finally, brothers and sisters, whatever is