Beware what we hope for. 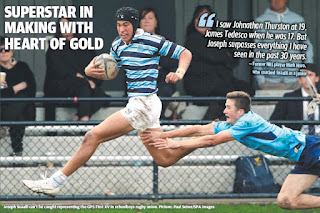 Folklore says that during the Great Depression a star arose to warm the hearts of average Australians and to give them hope – Phar Lap. The legendary champion race horse, victorious in 37 of his 51 races, supposedly raised the spirits of a nation weary of difficult times, unemployment and food shortages. Phar Lap played the role of hero to a nation whose hopes had sagged.

Facing our own period of hardship today it’s not surprising that we are looking for a new champion. Recently this has led to a rather unedifying spat between Rugby Union and Rugby League over the playing future of teenage sensation Joseph Suaali. At 16, this young man is already 193 cm and 93 kg. Videos online reveal a dynamic runner of the ball, a wicked sidestep, wonderful ball skills and fierce tackling. It’s the sort of thing that makes old rugby souls get goose bumps – the prospect of a genuine talent that could revive a dying code. With a pedigree in Junior Rugby League and impressive stats in GPS Rugby it is no wonder that the rival codes are desperate to sign him and workout how they can fast track him to the senior ranks.

Sadly, the story of Phar Lap ended in disappointment with the champion’s mysterious premature death. Was it foul play or was he literally ridden into the ground. Did we expect too much? Was it fair for a nation to ride on a horse’s back expecting deliverance, rescue and economic salvation?

When two sporting codes are bleeding money, when officials and players are being laid off and taking pay cuts and when governments are doing their utmost to keep people in jobs it is rather unedifying to see a teenager being offered millions to play sport. Maybe it’s also a little unfair on him. But…it is great to have a distraction.

The promise of a new generation, the glory of speed and the fearlessness of youth are things to be welcomed and enjoyed. But not idolised.

10 His pleasure is not in the strength of the horse, nor his delight in the legs of the warrior; the Lord delights in those who fear him, who put their hope in his unfailing love. Psalm 147:10-12