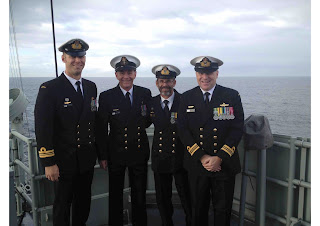 One of the highlights of my naval career has been a deployment to the Middle East on a warship, with a significant number of Aboriginal and Torres Strait Islander sailors and officers. Consistently, they were hardworking, productive and committed members of our ship’s company. They wore infectious smiles, possessed amazing senses of humour and displayed dazzling rugby skills. Years later I had the honour of conducting the wedding service of one of those sailors in the Naval Chapel at Watsons Bay.

Our much-loved ship’s Captain (a Kiwi by birth) decided to form an Indigenous dance group to perform at our many diplomatic engagements. Indigenous, Torres Strait Islanders and white Aussies danced together. The black members performed with the rhythm and flair of their cultural heritage while the white members awkwardly did their best to make up the numbers. Wherever they danced the locals embraced the dancers, cheered and demanded selfies.

Sailing north our Captain stopped the ship in a channel near Thursday Island so that some of our sailors’ families could visit. In small boats about thirty family members came on board and blessed us with local seafood delicacies. The ancient maritime heritage of these people and the rich naval heritage of the RAN came together for an emotional and culturally affirming afternoon. Quite a few of those young visitors have since enlisted to serve in the Australian Defence Force.

My best mate on that deployment was a fellow ‘mature aged’ officer who the young Indigenous sailors on board referred to as Uncle. Apart from being an excellent officer, Uncle is a very special human being. Like many a young sailor, he survived a long period in his life and career when alcohol was his demon. Then one day, for the sake of his marriage, family, career and life he gave away the grog and never looked back. There was not one day on that seven-month deployment that this man did not make me laugh, often to my core. His keen mind, thoughtful spirit and irreverent  sense of humour did much to keep many of us sane. He quietly wore his Indigenous heritage with deep pride and believed as a nation we needed to be healed and united.

The events of the last few weeks force us all to stop and pause. As I reflect, I smile spontaneously as I think of the many Aboriginal and Torres Strait Islander members of the RAN who are a credit to their country, people, families, Navy and nation.