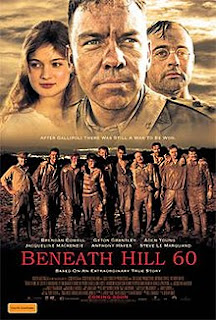 Guerino grew up in a small picturesque village in Northern Italy. His youth was marred by the great economic depression of the 1890s. As a teenager he left poverty behind in the hope of finding a new life. He arrived in Fremantle WA, and eventually worked as a tin miner in the Atherton Tablelands in far north Queensland. On 24 Jan 1916 Guerino, aged 21, enlisted to fight for Australia in WW1.

Standing just 5ft 3in and weighing 9st 9lbs, Guerino, or George as he became known, had a fresh complexion, hazel eyes and brown hair.  He was appointed to the 4th Tunnelling Company on 12 May 1916 at Rosebery Park, Sydney.

He embarked on HMAT Warilda on 22 May 1916, arriving in France on the 29 Aug 1916 where he joined the 1st Australian Tunnelling Company. Apart from a minor misdemeanour in Dec 1916, and a short stay in hospital in 1918, George appears to have survived the war without any great misfortune.

The young Sapper (service no 3358) was deployed at Hill 60. Following the first explosion deep below German trenches in 1915, the Australian Tunnellers were given the task of building and maintaining a tunnel system, which included drainage and ventilations shafts. They dug extensive tunnel networks, assembled explosives and defended their tunnels from detection and capture by the Germans. This dangerous, demanding and at times deadly work culminated in a final massive detonation on 7 Jun 1917.

Captain Oliver Woodward, Officer in Charge of the detonation at Hill 60, wrote a personal unpublished diary that formed the inspiration for the making of the 2010 Australian movie Beneath Hill 60. Woodward’s diary also reveals that he was given the task of stealing behind enemy lines with a small group to investigate an explosive mine threatening a major railway. Guerino was an integral member of the group because he spoke fluent French.

In Nov 1918 Guerino was awarded the Military Medal for Gallantry in Battle – probably as a result of his involvement in the Battle for Sambre Canal in France.

After the war Guerino bought land in the green belt of Sydney. On weekends and at night, he established  a 10 acre orchard while during the day he laboured in a sandstone quarry at Pymble. Tragically like many others who returned from WW1, Guerino’s wartime experiences and suffering never left him. He struggled with significant physical and psychological ailments. His fondness for a drink often led to complications. He died an early and untimely death at the age of 50, two days before victory was declared in Europe at the end of WW2, leaving a wife, a 22 year-old married daughter and a 12 year-old son.

I retell Guerino’s story for two reasons. Firstly, although Anzac Day parades are cancelled this year, it is still essential to stop and to pay our respects to those who have gone before us. At a time of challenge, hardship and struggle, remembering past sacrifice has never been more important. Our present way of life is built on the sacrifice and service of those who have gone before. Guerino’s story is one personal reminder of the cost of war.

The second reason I tell Guerino’s story is because he was my grandfather.
I would love to be able to tell him...

Greater love has no one than this: to lay down one's life for one's friends. John 15: 13