There is a season. 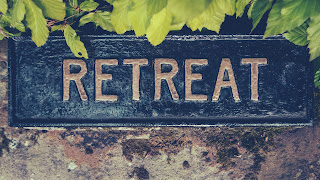 Courage is easy to identify – right? Courage faces a crisis with a spirit that is ready to defy. Courage stands up in the face of fear. Courage never takes a backwards step. Courage, in short, is ready to stand your ground and fight. Right?

During WW1 many generals believed that courage would win the day. In spite of the odds, in spite of the dangers and in spite of the concerns generals ordered men to advance with courage. The troops had courage and they were willing to fight to the end. There was however one problem. Advancing in the face of machine gun fire was not courageous. It was foolish! Calling on the troops to exhibit courage was absurd when the enemy was overwhelming. Sometimes the most courageous call is not to advance, but to retreat. Courage is no substitute for wisdom.

Today the world faces its greatest health crisis in 100 years. Doctors, pandemic researchers, immunologists, health officials and the World Health Organisation are unanimously shouting that today the most courageously wise thing to do is to retreat. They are warning us that for our own sake, for the sake of the most vulnerable and for the sake of the health system we need to socially isolate as comprehensively as possible.

Every country that has had a major outbreak of Covid-19 is now listening.
However, countries which still have a small number of cases are much slower to call a general retreat.  Some still want to go to the footy for one last week. Some think it can’t happen to me. Some fear the economic cost of retreat. Some fear that retreat will make us look weak. Some believe that the herd will be stronger if we advance and accept the casualties. Some are so committed to victory that the thought of retreat is unimaginable.

I am neither a general or a scientist. I’m not even sure that I am very courageous. In the face of the reality of the medical and economic crisis we are facing, I too am afraid. However, I am convinced that life has seasons. Humility demands that I accept the wisdom of the scholar and the scientist and humbly bow before my Maker, dependent on his mercy and grace.

This season too will pass. We are not helpless. God has given us minds to think and reason to follow.

Our refuge is prayer.
To retreat today is not to give up, but to ready ourselves for tomorrow’s advance.