All over bar the shouting 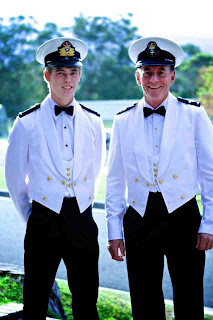 The 20-week New Entry Officers Course (NEOC 47) is close to being complete.  Our graduation parade is next Wednesday and between now and then all that is in front of us is 35-40 hours of marching drill practice for our passing out parade. Quite literally it is all over bar the shouting.
Someone commented recently; “ Surely they don’t shout at 52 year old ministers of religion turned Navy Chaplain do they?” Actually they do! Even today a very friendly Petty Officer suggested with considerable public volume that my about turn was about as “graceful as a penguin on ice scates ”.
Nonetheless much has been achieved since I last updated about 9 weeks ago.
·      We researched and wrote a major naval history essay.
·      We survived three weeks at sea on one of the RAN’s oldest ships. We were accommodated in the “ troops mess” which was not exactly third world conditions but was not exactly first world either.
·      We enjoyed port visits to Townsville and Noumea, including some very unusual outdoor accommodation at a French air base.
·      We experienced a flight back from Noumea in back of a C130 Hercules RAAF plane.
·      We endured 7 end-of-course exams in 3 days. Some of us found these more stressful than the HSC. What is more interesting is that most of my fellow classmates were not even born when I last sat exams. The range of subjects included everything from torpedos, radar and naval guns, to business planning  to the Geneva Convention and to what types of pencils are used on the bridge of a ship.
·      We survived with arms (but not ammunition) exercise Matipan – a 5 day leadership field exercise. We interacted with helicopters, the police, the fire brigade and emergency services. We were challenged by role playing refugees, looters, lost fisherman, terrorists, camera crews and very demanding senior officers. We spent a day doing evolutions on a small ship on Jervis Bay and a 7-hour night on a much smaller life raft. We survived on ADF ration packs trusting, in spite of the evidence, that they actually contained food.
For me the experience of learning a new ‘charry’ language, adapting to a military maritime culture and learning to live with peers who are mostly younger than my children was always going to be tough. It has been. However like any challenge it has also bought great highs. Not to mention a load of precious memories, a huge number of very funny moments and a new very Gen Y nickname. (Q-Dog, or Q- Daddy and even Q Grand-daddy).
For me faith in this context was an essential. People say that faith is a crutch for the weak. A better description is that faith is like a great pair of joggers. You still have to run. The pain is not eliminated. But the support, the strength, the confidence and the reassurance of knowing and being known by a loving God can make the journey so much easier.
Psa. 46:1 God is our refuge and strength, an ever-present help in trouble.
PS. For all Word4Life readers in Sydney I would like to invite you to a special service called a “ setting apart service” which is essentially the Presbyterian Churches way of commissioning me to my new role. I commence on 03 Dec 2012 as Chaplain to HMAS PENGUIN. The service will be held on 07 Dec 2012 at 7.30pm at Macquarie Chapel (see www.macchap.com.au for address and details). The invitation is open to all.
Posted by Word4Life at 2:15 PM