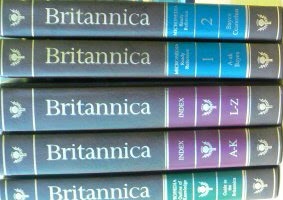 What do the well respected Encyclopedia Britannica and the not so well respected ‘lads’ magazine FHM have in common? Not much, you might say.
Encyclopedia Britannica has been in print for 244 years and can be found in most English speaking libraries in the world. As even a rival concludes… “Since the 3rd edition, the Britannica has enjoyed a popular and critical reputation for general excellence.” FHM was first published in 1985 and was described as a glossy feast for those interested in grog, gadgets, gags and girls. Both originate in the United Kingdom but strangely enough that is not the thing they most have in common. No, last week both announced that their publications were coming to an end. Britannica seems to have finally succumbed to its ubiquitous online nemesis, Wikipedia. In the end there were not enough people left to pay thousands for a multi-volume encyclopedia that was out of date by the time of delivery, even though its reliability and credibility were never challenged. The explanation for the termination of FHM’s Australian edition in May was declining sales, because reportedly men have found similar ‘information’ online.
The rise and fall of magazines, newspapers, books and other print material highlights the remarkable longevity and survivability of the greatest old book, the Bible. It too has its online versions now but is still very much in print: in hundreds of languages; in all sorts of editions; in quite a few different translations; and with a future that seems assured.
When I first read the Bible in my late teens, it surprised me for a number of reasons. Firstly, in a good modern translation it was far more accessible than I had imagined. As much of the Bible is taken up with a mega multigenerational story, and then smaller stories within that story, it was surprisingly interesting to read. Secondly, I was surprised how much of the Bible was familiar, even to someone who had not read it before. So many of the stories, lessons and even phrases permeate western culture, plus I must have absorbed more Hollywood Biblical classics than I cared to admit. I kept reading and thinking – is that where that comes from? Finally, reading the Bible was a lot more serendipitous than I expected. The passage or story I read not only made sense to me – it made sense to today, to what was happening in my life, the very day I was reading it.
When I was given a Bible as a 19 year old, my friend left me with a simple encouragement – “This is the Word of God – read it and live”. It was good advice and I am still reading it and more convinced than ever that it is the eternal Word that will never pass away.
Heaven and earth will pass away, but my words (Jesus said) will never pass away.   Luke 21: 33
Posted by Word4Life at 3:21 PM