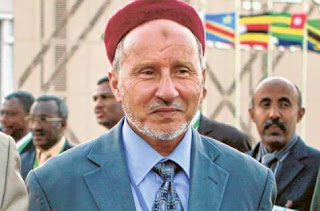 Understandably the capture and death of Muammar Gaddafi was widely celebrated by the people of Libya, but surely many others around the world must have watched his bloody body being paraded in the streets and his summary execution as frightening developments. He may have deserved this treatment in every way, but the mob taking revenge on the streets can hardly give confidence to the West that the future will be better than the past in any way. The USA and NATO’s military support for this supposed flowering of democracy seems to have again completely ignored the reality of Islam in that part of the world and the popular desire to replace Gaddafi, not with a liberal democracy, but with a Muslim State based on Sharia Law.
Last week, while celebrating his country’s new-found freedom, the Head of the Interim Government, Mustafa Abdul-Jalil, indicated that one of the fruits of the revolution would be the reintroduction of polygamy. Under Gaddafi a law was passed that stipulated that wives had to grant permission for their husbands to acquire a second wife. The result of Gaddafi’s law was that polygamy was very rare in Libya. Mr Jalil defended what he believed the people had been fighting for:
“This law is contrary to Sharia and must be stopped,'' Mr Jalil said, vowing the new government would adhere more faithfully to Sharia. The next day he reiterated the point: ''Sharia allows polygamy,'' he said.
Of course the remarks outraged women in Libya and many others throughout the world. The French Foreign Minister, Alain Juppe, whose forces had helped overthrow Gaddafi said: ''This is a problem for us, especially in regard to respect for the dignity of women.''
It seems that in the West we hold to two absolute religious mantras that we refuse to reconsider in spite of overwhelming evidence. The first mantra is that religion in most people’s lives is really not that important. The second is that all religion is essentially the same thing and in the end pretty benign, private and irrelevant. In many ways our theological naivety may be opening a door to the sort of religious practices that not only oppress women, but lead to the most regressive, harsh and intolerant societies.
Ask the Coptic Christians in Egypt if they think the so-called ‘Arab Spring’ is resulting in freedom and democracy. Tony Blair recently said that if we want to understand the world today, then we are going to have to understand religion. It’s about time the West overcame its secular delusion and faced the reality that for millions, their dream is not liberal democracy but Sharia law.
“The fool folds his hands and ruins himself. Better one handful with tranquillity than two handfuls with toil and chasing after the wind.”  Ecclesiastes 4: 5-6
Posted by Word4Life at 4:41 PM