The Politics of Compromise

Why is it that we consider people who never change their minds as more virtuous than people who look for compromise? With some sections of the media those voices farthest to the left, in our system represented by the Greens, are seen as the most principled and thus the most virtuous. Other sections of the media look to the hardline right wing positions of the Nationals, and especially the Queensland Nationals, as the only principled politicians in the system. But is the idea of compromise really such an unprincipled position? 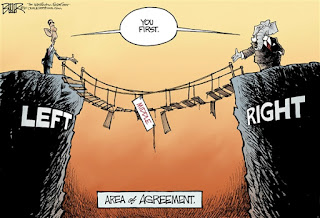 When it comes to people arriving in Australia by boat, the extremes not only describe these people differently but are also sure their solution alone is correct. The right is convinced that these ‘queue jumpers’ aided by ‘people smugglers’ must be halted at all costs. According to the left these ‘poor refugees’ must be treated with compassion, justice and mercy. I have never written about boat people before as I find that the analysis of both the left and right on this issue shows both are partially correct and both are to some degree misguided. Surely someone has to admit that this is a very difficult issue with competing values and objectives. We do want to be a just and caring society. But at the same time we don’t want to be a soft touch, encouraging people to take risky sea journeys and fuelling an industry that exploits people who are both vulnerable and willing to take the law into their own hands. When someone knocks on our church office door for money we face the same dilemma. We want to be kind and find a way to genuinely help people, some of whom have very real needs. But if our policy is too soft and we simply hand over cash, we don’t actually help most people and in fact the message seems to get out and the problem only grows.
When it comes to deciding what to do about water allocations in Australia, we face another right - left divide which again is not that simple. If we listen to the right, then the needs of farmers and food security trumps the environment. If we listen to the left, then the river’s health is more important than the maintenance of farming families and communities under threat.
The much-scorned act of political compromise may be more virtuous than it first appears. Surely to balance competing interests is to really understand the issue from both sides. Is that not what we do every day in our most important relationships? Great relationships - friendships, marriages and even business partnerships, are fuelled by a willingness to consider someone else’s needs, not just our own. Ideological husbands destroy their marriages and exasperate their kids. Domineering, controlling wives and mothers leave a trail of relational wreckage. Teenage immaturity is by definition when a 15 year old cares only about his or her own needs.
If you take the words of Jesus seriously, then we need to understand as well as be understood. We have to give as well as take. We need to do unto others as you would have them do to you.
Do to others as you would have them do to you.  Luke 6:31
Posted by Word4Life at 3:32 AM