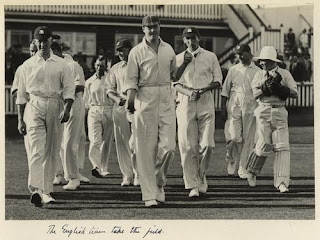 What has happened to the Australian cricket team? After almost two decades of domination of the cricket world, it seems we have come back to earth with a thud. For the past 20 years we have witnessed some extraordinarily brilliant cricketers playing for this country and now we have come back to reality. In the current series against England we seem to have three main problems: Firstly, their bowlers are better than ours; more experienced, more talented and more likely to cause trouble in all conditions. Secondly, their batsman also seem better than ours; younger, more at the peak of their game and more confident. Finally, even their fielding seems better than ours. It's not that long ago that the West Indies were the most feared cricket team in the world and then their glory faded. Our team dominated next with the likes of Warne, McGrath, Gilchrist, the Waughs, Ponting, Hayden and so many others providing supremacy. But that era is now over and who knows, a new golden age of English cricket may now be upon us?

In the last 20 years in much of the western world we have also witnessed an era where bankers and financiers have been the superstars. Money has promised victory at every point. New and inventive ways of financing our world promised an era where prosperity would grow forever, even if our income did not match this prosperity. But this era of endless affluence, much like the Aussie cricket team, may have its best days behind it. Huge personal and corporate debt threatened to derail the party when the Global Financial Crisis hit in 2008. The danger was averted by government stimulus packages as well as governments guaranteeing the banks. Governments kept the party going by taking on for themselves huge borrowing. Instead of fixing the problem, the excessive debt passed from private and corporate balance sheets to the government's balance sheet. And now the problems have exposed a number of countries like Greece and Ireland, with many fearing that Spain, Italy and others may be next. Once again the problem has been moved, with groups like the EU (a collection of countries) bailing out these heavily indebted countries. But again the problem has not been fixed – it has only moved to a higher body. Much like a sporting team that refuses to face the reality that the glory has faded, the western world keeps trying to convince itself that better days are just around the corner.

Maybe at a time where the material dream is fast becoming a nightmare, it is time for a comeback of spiritual values and hopes. Though most of us love winning, experience also suggests that character and meaning are more often discovered in defeat, rather than victory. To learn to pray may yet prove a more enduring quality than spending. Thrift and patience, with its companion of contentment, may even challenge the supremacy of a gold Amex card. Worshipping the Creator rather than the creation may yet be resurrected.

They say every dog has its day. We may realise in time that materialism itself – the god of bling – is indeed a dog.

“Look, here comes a man in a chariot with a team of horses. And he gives back the answer: ‘Babylon has fallen, has fallen! All the images of its gods lie shattered on the ground!’”” Isaiah 21: 9