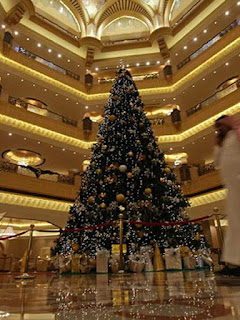 Abu Dhabi’s seven star Emirates Palace Hotel is expected to set a Guinness World Record with their display of the most expensive Christmas Tree in the world, valued at $US 11 million. The tree is lavishly decorated with 181 pieces of jewelry and precious stones including diamonds, pearls, emeralds, sapphires and other precious stones. The 13 metre faux evergreen is located in the gold leaf bedecked rotunda of the hotel. Emirates Palace Hotel has also announced a special weekend package, where you can enjoy the tree and also the services of a private butler, a chauffeur-driven Maybach luxury car, as well as accommodation and a private jet available for trips to other countries in the region. The cost of the weekend package is a cool $US 1 million and though they do not mention it in their publicity, you would hope that you might also get free breakfast, valet parking and a late checkout.

What a tragedy that as a hotel in a Muslim country looks to the West and their Christmas tradition, all they can see is bling! How sad that they don’t look back a little further in the Christmas tradition and realize that the whole thing actually has a very Middle Eastern flavour.

After all Joseph and Mary were a couple of teenagers growing up in what some today call Israel but others call Palestine. The stargazers (the Magi who we often refer to as the Wise Men) of the ancient world came from the East – which probably means they were Persian or maybe Babylonian, from what is now modern day Iraq. There were gifts of precious stones and perfumes, but the gifts were a bi-product of the story, not the story itself.

Of course the clash at Christmas between East and West also goes right back to the historical source of the story. The Magi clashed with the Roman (Western) ruler, Herod, whose desire for intelligence stemmed from his political insecurity, which sounds rather similar to current dramas between East and West. The pact between Herod and the Magi resulted in deceit, denial and ultimately threat and intimidation, all of which are much more central to the Christmas story than fir trees from Germany.

It is hardly surprising that all the wrong elements of the Christmas tradition get emphasised, as the truth of the story remains somewhat politically and culturally dangerous. The birth of a Saviour implies that we need rescuing. The declaration of peace suggests that our conflict with God has descended to war. The picture of humility remains a challenge to a people obsessed with power and bling. The divine claims of a baby in a manger threaten our view that even if there is a God He is supposed to serve us. The worship and adoration of a bunch of rough country lads (shepherds) suggests these events were much more important than most soppy Christmas cards let on today.

We can’t blame Abu Dhabi for being overwhelmed with bling when we too have done everything in our power to avoid the birth of Jesus.

“Today in the town of David a Saviour has been born to you; he is Christ the Lord.” Luke 2: 11