When a Preacher Stops Preaching 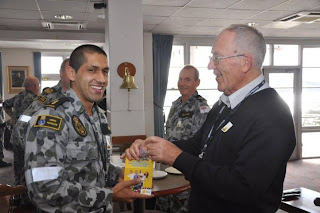 Some time in the next week will mark a rather unusual anniversary.  For the best part of 30 years I have been a preacher. In the early days I preached monthly, for most of the time I preached weekly, and in more recent years normally three times a week. A year ago I preached my last sermon as a local church pastor before joining the Royal Australian Navy as a Chaplain.  As a Chaplain I engage in all sorts of ministry but don’t really preach. So what has God taught me over this last year when the preacher has not preached.
Firstly, looking back I probably underestimated the privilege that people afforded me by turning up to church to listen. Sure they were ultimately turning up to listen to God’s Word, but by turning up where I was the preacher they were making a decision to listen to me. Maybe over the years I underestimated that incredible honour.
Secondly, I am a little fearful that I may have caused too much suffering and too little blessing. Now as a listener, when I nod off I am reminded of my previous preacher’s ‘self-righteous judgement’, convinced that inattentiveness was always the listener’s fault. As the listener I am conversely convinced that the preacher is not always worthy of my attention.
Thirdly, I do miss preaching but in a rather unusual way. I had the joy of being the pastor of three wonderful churches, where increasingly preaching became a dialogue where we corporately struggled to relate our faith to life. Question times after preaching was a regular feature for me for over 20 years. These questions (and often the unsaid questions made clear by expressions, grimaces, dropped heads or even the odd walk out) made me engage in many struggles, fears and doubts. It made me question my faith to see if it really stood up. In a strange way I am sure my faith was personally stronger by having to preach. To be truthful I am sure at times my preaching sounded more like the ‘party line’ than a genuine reasoned defence.  However, mostly the people who listened helped me to preach genuinely and honestly in a society where growing secularism causes even the most devout to doubt.
Finally, I am learning afresh that you don’t have to be a preacher to preach. In the Navy every day I deal with blue collared (well, grey actually) men and women who are a long way from traditional Christian belief. Some have church backgrounds, most don’t. Almost all of them would be probably not make much sense of what I use to preach. But in all sorts of ways they come to me, or I come to them, where essentially I listen and occasionally have a few words to say. Surprisingly, by and large they appreciate that I listen and warm to what few things I have to say. Much like church the dialogue continues and I hope they are as blessed by these encounters as I am.
If I am not incorrect, the original word in the Bible we translate ‘preach’ has little to do with standing up in a church and teaching. It has more to do with proclamation – telling people the good news, the important news that God loves them outrageously in Christ.
Ironically the Navy refers to a public talk you give to impart information as a ‘brief’. As a church preacher I fear I was too seldom brief.
So maybe even though I am preaching less I may actually be proclaiming more.
Rom. 15:20 It has always been my ambition to preach the gospel where Christ was not known ….
Posted by Word4Life at 4:18 AM