Not Lost On God 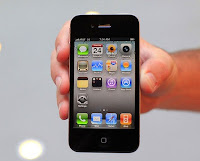 For a long, long, long time I have avoided a phone contract. I have bought my phones outright and paid as I went along. But the attraction towards the iPhone has grown, so the issue of facing a contract had to be considered again. I did the maths on buying outright and much to my amazement a contract was actually cheaper. As my daughter chirped; “ Dad, sign up. You can’t ignore the culture of instant gratification for a monthly fee forever”.
So with family unity in mind, my wife and I signed up to Virgin for a two year contract for new ‘his and hers’ iPhones. The salesmen at Virgin were surprisingly helpful, courteous, and not that condescending to a pair in their fifties signing their very first phone contract. They promised that with Wendy’s phone, transferring her service and number from Vodaphone, it would connect immediately - and it did. They warned that it would take a few days for the transfer from my old phone on Amaysim (on the Optus network) to Virgin (also on the Optus network). This did not really make sense, but they guaranteed that my old phone would work until the transfer and then I would enjoy the new service with my old number. So on Thursday night Wendy’s new iPhone was working fine and I was waiting for a transfer within a day or two.
By Friday morning my old phone had stopped working and then the fun began. Wendy started to receive all my calls and my new iPhone was working but with what looked like a new number. Sure enough, after a few phone calls it was admitted that there was a ‘patching error’ and Wendy was now on my number and I was on a temporary number. They suggested a quick fix that would take a couple of hours. Wendy could keep my number and they would retrieve Wendy’s number and then all we would need to do was swap the SIM cards, otherwise the problem could not be fixed inside a few days. So by Friday night it should be fixed - but it wasn’t. On Saturday we swapped phones, which meant I had my number but Wendy’s contacts diary and phone numbers, and Wendy had my contacts diary and phone numbers, with a new number that no one knew. Saturday and Sunday passed with repeated promises that things would be fixed. Continuing with the wrong phone seemed dumb, so on Sunday we actually swapped SIM cards as they suggested. So now I had my phone with my number and Wendy started Monday with her phone and a weird number.
By lunchtime on Monday Wendy again started receiving my calls on her phone. I then realized that instead of half fixing the number problems as they promised, they had completely fixed the problem, which meant we had the wrong SIM card in our respective phones. So after many days of drama we finally swapped the SIM cards back and voila, instant gratification! We are away (we hope).
The whole episode got me thinking about God’s knowledge of us. He does not rely on numbers or codes – he knows us by name and then at a level even deeper. God knew us from the womb and has our allotted days written in his Book of Life. He knows our strengths and he knows our shades of grey. He does not forget and even though we are often determined to be off line to God, He is willing to reconnect to us when we are willing to accept His incredible offer, on His gracious terms and conditions.
Psalm 139: 1  O LORD, you have searched me and you know me.
PS. Our last Sunday at MacChap will be next Sunday the 17th June. I will be preaching for the last time at all three services 8.30am, 10.30am and 6.30pm. We are having a special day with morning tea after the first service and lunch and dinner after the others. Word4Life readers who are close by are most welcome to share in this special day.
Posted by Word4Life at 11:14 PM