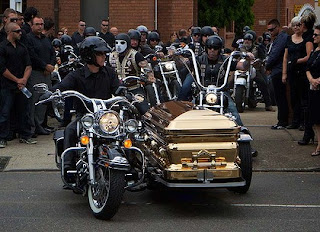 A new fashion statement seems to be creeping into popular culture. At this stage it seems only the preserve of the rich and dodgy, but I fear it may only be a matter of time before it is embraced much more widely. Last week Neal Todorovski, a member of the Lone Wolf Bikers, was buried in Cabramatta after being murdered in cold blood at Sans Souci in southern Sydney on 4th January. Todorovski’s biker mates passed the hat around, so to speak, and chipped in a total of $42,000 to pay for the ultimate in eternal bling - a gold plated coffin.
The casket was the same model as those used to bury Melbourne underworld figure Carl Williams and pop icon Michael Jackson. The statement was emphatic. The gods of gold have long been popular in life, so it was only a matter of time before they were enlisted for transport in death. Coffin bling may become the ultimate flashy, ostentatious, elaborate accessory that all the hip people will need. It is also the most stupid and aimless waste of money, as the beneficiary hardly gets to enjoy either the luster of the gold or the impression it is supposed to have on his friends.
Death, though ever present, is in many ways an area that contemporary culture does not really know what to do with. After abandoning God as a culture, the obvious conclusion is to mourn the loss of life and to grieve the fact that death without God is the end of existence. What we do instead is to turn funerals into ‘celebrations of life’ – which though palatable is ultimately just another form of denial. Increasingly funerals in Australia are taken by civil celebrants, something that is quite correct, as it does reflect people’s lack of belief. But these celebrants are left with little to say, except to ignore death and celebrate life. Without a God to seek in prayer, without God’s Word to read, and without the hope of resurrection, there really is not a lot to say.
The Bible encourages us to face the bleakness and loss that is death with real hope. No amount of metallic luster can ever mask the ugliness and loss that death delivers. But to believe that Jesus died to take the punishment that our sins deserved and then rose to defeat death, gives hope to all who trust in Him. No amount of money, no show of wealth, no boast of power has any gravitas in the face of death.
The One who died and rose again remains our richest hope.
“We believe that Jesus died and rose again and so we believe that God will bring with Jesus those who have fallen asleep in him.”  1Thessalonians 4: 14
Posted by Word4Life at 1:07 PM