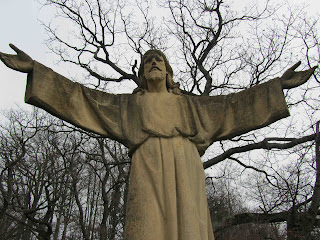 God is back! After a three-year retirement from Sydney radio, John Laws, the man who was affectionately referred to at his previous station 2UE as God, is back on the wireless. Laws has announced that he is bored and wants to 'keep the dream alive'.
Laws has returned to radio station 2SM, the great radio leader of the seventies that in recent years has slipped to the very bottom of the radio pecking order. So the man who was once the greatest star with the most loved voice on Sydney radio, is back on the station that at the moment has virtually no listeners. Will he convince his old audience to move up the dial to 2SM? Will it be the makings of a station desperately in need of a Messiah? Will Laws still be at his best or at 75 will his golden tonsils be sounding a little tarnished? The first caller to greet Laws’ return, quite probably a plant, was under no doubt – it was nothing short of the second coming.
In a godless age false gods will be raised up. They will have their days of glory. They will wane.  They then may enjoy a brief comeback, but they will eventually fade like cut flowers. Messiahs of all descriptions rage for attention, promising one form or another of salvation. When these Messiahs eventually flag there will always be calls to bring them back. As the Australian cricket team struggles there have even been calls to ask Shane Warne to make a comeback. At best comebacks briefly delay the inevitable - our glory is not eternal and our battery has a use by date.
God doesn’t seem to bother playing our game at all. He rarely turns up when we demand His attention. He doesn’t seem to like the limelight at all. He seems content to neither shout nor spin. He appears a little unimpressed with the powers and principalities of this world, that promise us all sorts of things but ultimately just seek their own glory.
God did show up in the Babe of Bethlehem. In Jesus we see a star that will never fade. His life gives us the truest picture of God’s glory. His death opens an eternal passageway to salvation. His unlikely resurrection confirms His divinity. His very real second coming will not bring about an extension of his career, but a day of reckoning for us all.
“Just as man is destined to die once, and after that to face judgment, so Christ was sacrificed once to take away the sins of many people; and he will appear a second time, not to bear sin, but to bring salvation to those who are waiting for him."   (Heb. 9:27-28, NIV)
Posted by Word4Life at 2:45 AM